The iconic A380 has flown over 800,000 flights carrying more than 300 million passengers since its entry into service.

As production comes to a close, the A380 will keep flying for decades to come, and Airbus is continuing to fully support A380 operators and their fleets.

Flying for decades to come

Boarding an A380 is a unique experience that introduces passengers to superior standards of in-flight comfort, from first class to economy. As the world’s largest and most spacious passenger aircraft, its cabin allows travellers to stretch out in a calm and relaxing environment. With the freedom it gives passengers to move about the aircraft, it’s no surprise that the A380 is a favourite in all cabin classes.

It has two full-length decks with widebody dimensions. With more seats than any other aircraft, the A380 offers a solution for traffic growth and airport congestion as we emerge from the pandemic.

A380 Facts and figures

Combining the most advanced aviation technology and an inspired cabin design, Airbus is proud to have created an aircraft celebrated for its outstanding quality in every aspect. Leading the industry in standards for innovation, experience and efficiency, it is appreciated by passengers, pilots and crew alike.

The A380 has set a new standard for the global aviation industry. Not only did it usher in a new era for passenger comfort, the A380 also raised the bar for environmental standards with its low fuel consumption per passenger and low noise levels – as well as reduced CO2 and NOx emissions, which has been passed on to future aircraft generations.

As an example, the On-board Airport Navigation System (OANS), developed in association with Thales for the A380, is now deployed on other Airbus types (A320neo, A330neo and A350). OANS offers pilots an overview map of the airport apron and taxiways, as well as showing the aircraft’s position on that map. The OANS helps to reduce errors in surface navigation and prevent runway incursions.

The A380 also is a first for the 2H/2E systems architecture, where the traditional three hydraulic circuits are replaced by two hydraulic and two electric systems, so as to reduce weight, improve system redundancy and safety.

A key A380 innovation is the use of an electronic library to largely replace the traditional paper documentation used by pilots. This library allows flight and maintenance crews to easily locate relevant operational information in the various flight manuals, lists and logbooks, while enabling an optimisation of performance and weight-and-balance computations. This is incorporated into the new generation of aircraft. 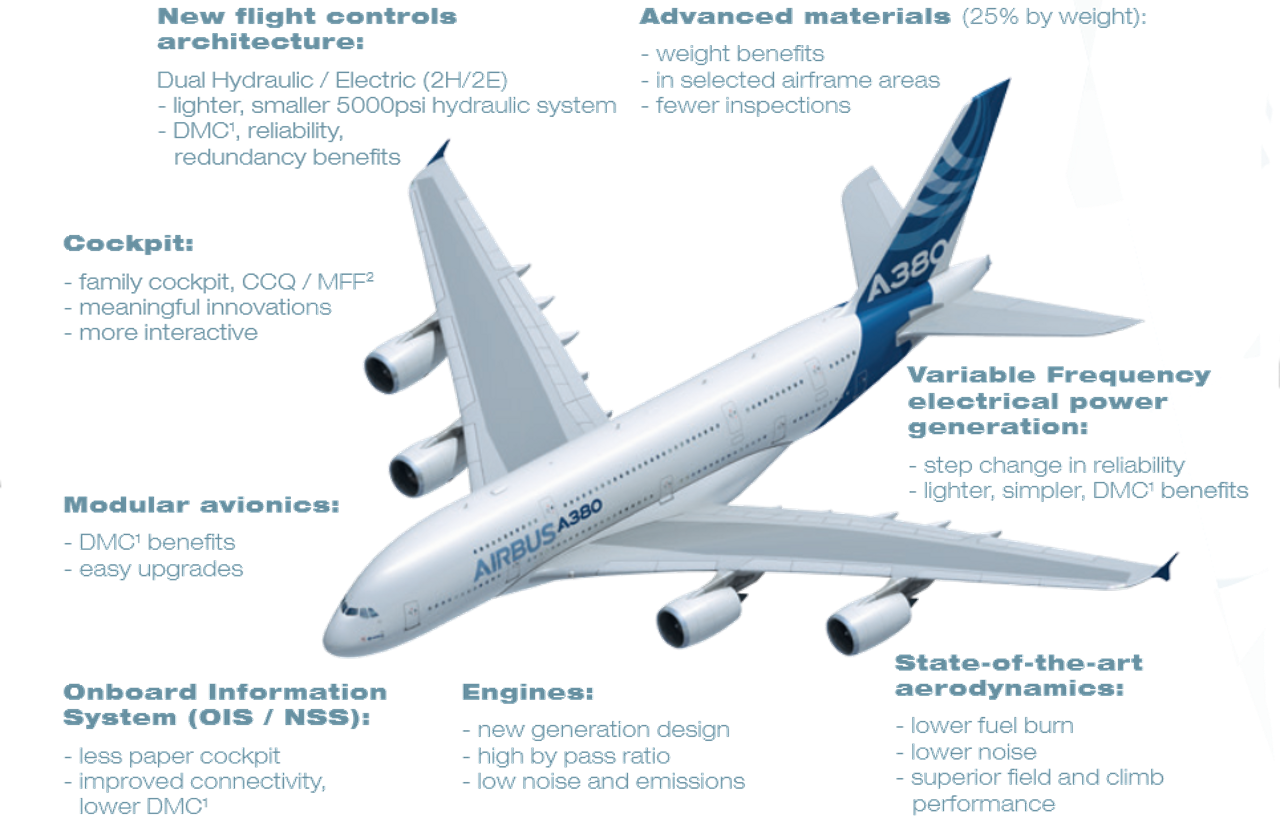 Airbus introduced its innovative Brake-to-Vacate technology on the A380, allowing flight crews to more effectively manage approach and landing by pre-selecting the optimum runway exit. This can reduce runway occupancy time by up to 30% – significantly increasing the number of aircraft that can be handled by the world’s airports. This technology has also been incorporated on A350 aircraft

The latest advances in structures and materials include the use of advanced aluminium alloys for the wing and fuselage, along with the extensive application of composite materials in the centre wing box’s primary structure, wing ribs, and rear fuselage section.

The A380 also incorporates Glare™ material in the pressurised fuselage’s upper and lateral shells. Glare™ is a laminate incorporating alternating layers of aluminium alloy and glass fibre reinforced adhesive, with its properties optimised by adjusting the number of plies and orientation of the glass tapes. This offers a significant reduction in weight and provides advanced fatigue and damage resistance characteristics.

Two high-bypass ratio engine options (the Engine Alliance GP7200 and Rolls-Royce’s Trent 900) are combined with an advanced wing and landing gear design, making the A380 significantly quieter than other large airliners – enabling this very large aircraft to meet strict local regulations at airports around the world.

With a new wing design and composite materials accounting for 25% of its structural weight, the A380 is  an all-around efficient aircraft.

The A380’s reliability and maintainability are further increased with modern technology, including an enhanced onboard central maintenance system and variable frequency generators – which simplify the electrical generation network. Moreover, the A380’s 5,000psi hydraulic system results in smaller diameter pipes, as well as minimising the quantity of hydraulic fluid on board. 5,000psi is also now used in the A350.

Sidestick control: The A380 may be the largest airliner ever built, but a pilot who has flown an aircraft of the A320, A330/A340 or A350 Families will feel right at home in its cockpit. For example, the A380's sidestick control – introduced with full fly-by-wire by Airbus on the A320  is the same distance from the throttle as on other Airbus passenger aircraft.

Braking: The Brake-to-Vacate system helps ease airport congestion and reduce the amount of time an aircraft remains on the runway. Enabling pilots to select a runway exit while the aircraft is making its landing approach, Brake-to-Vacate uses the auto-flight, flight controls, and auto-brake systems to regulate deceleration after touchdown. This allows the aircraft to reach a specified exit at the correct speed under optimum conditions. The system is an additional safety measure that helps to avoid runway excursions.

The A380 leverages Airbus’ expertise in aircraft design, sharing a large degree of commonality in systems, flight deck, procedures, and maintainability with the fly-by-wire A320, A330/A340 and A350 families.

Pilots do not need extensive training to transfer from one aircraft type to another, increasing their productivity and reducing the training costs associated with the Airbus fly-by-wire families’ Cross Crew Qualification and Mixed Fleet Flying concepts.

Airbus commonality extends from the flight deck into the passenger cabin as well, with a maximum use of similar systems, control panels and procedures across the aircraft families. As a result, cabin personnel benefit from familiarity of aspects on different Airbus aircraft, while aircraft maintenance is streamlined by the high interchangeability of systems and parts.

The A380 – which typically seats more than 500 travellers – provides immediate congestion relief for some of the world’s busiest airports by offering greater passenger capacity.

The A380 is reputed for low noise emissions. In many cases, the A380’s larger wing area enables it to land significantly slower, which generates half the noise of earlier-generation large aircraft.

The A380 is highly compatible with existing airport infrastructure, allowing for smooth airline operations and services for passengers. It is designed to reduce time at the gate during critical stages for airlines: boarding and deboarding passengers and resupplying the galleys for the next flight.

The A380 shares many key characteristics with smaller widebody aircraft, which means carriers can perform scheduled operations from Code E airport gates with minimal changes to infrastructure and ground handling equipment.

Its superior cabin architecture allows airlines to quickly board and disembark passengers – even without direct upper deck boarding access, and to optimize catering time, which is performed at the upper and main deck simultaneously for shorter turnarounds. Ground servicing equipment has been in service since the aircraft began commercial flights, and is compatible with other widebody aircraft.

Upper deck boarding provides an additional possibility to offer passengers customised services. Some airlines have created a seamless transition from the ground to the aircraft, with dedicated lounges for premium travellers that enable direct boarding to the A380’s upper deck.